Douglas Fairbanks began acting at an early age, in amateur theatre on the Denver stage, performing in summer stock at the Elitch Gardens Theatre, and other productions sponsored by Margaret Fealy, who ran an acting school for young people in Denver. He attended Denver East High School, and was expelled for cutting the wires on the school piano.

He left school in the spring of 1899, at the age of 15. He variously claimed to have attended Colorado School of Mines and Harvard University, but neither claim is true. He went with the acting troupe of Frederick Warde, beginning a cross country tour in September 1899. He toured with Warde for two seasons, functioning in dual roles, both as actor and as the assistant stage manager in his second year with the group.

After two years he moved to New York, where he found his first Broadway role in Her Lord and Master, which premiered in February 1902. He worked in a hardware store and as a clerk in a Wall Street office between acting jobs. His Broadway appearances included the popular A Gentleman from Mississippi in 1908–09. On July 11, 1907, Fairbanks married Anna Beth Sully, the daughter of wealthy industrialist Daniel J. Sully, in Watch Hill, Rhode Island. They had one son, Douglas Fairbanks Jr., also a noted actor. The family moved to Los Angeles in 1915.

After moving to Los Angeles, Fairbanks signed a contract with Triangle Pictures in 1915 and began working under the supervision of D. W. Griffith. His first film was titled The Lamb, in which he debuted the athletic abilities that would gain him wide attention among theatre audiences. His athleticism was not appreciated by Griffith, however, and he was brought to the attention of Anita Loos and John Emerson, who wrote and directed many of his early romantic comedies.

In 1916, Fairbanks established his own company, the Douglas Fairbanks Film Corporation, and would soon get a job at Paramount. 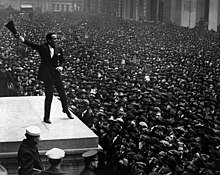 Fairbanks met actress Mary Pickford at a party in 1916, and the couple soon began an affair. In 1917, they joined Fairbanks' friend Charlie Chaplin selling war bonds by train across the United States and delivering pro-war speechs as Four Minute Men. Pickford and Chaplin were the two highest paid film stars in Hollywood at that time. To curtail these stars' astronomical salaries, the large studios attempted to monopolize distributors and exhibitors. By 1918, Fairbanks was Hollywood's most popular actor, and within three years of his arrival, Fairbanks' popularity and business acumen raised him to the third-highest paid.

In 1917, Fairbanks capitalized on his rising popularity by publishing a self-help book, Laugh and Live which extolled the power of positive thinking and self-confidence in raising one's health, business and social prospects.

To avoid being controlled by the studios and to protect their independence, Fairbanks, Pickford, Chaplin, and D. W. Griffith formed United Artists in 1919, which created their own distributorships and gave them complete artistic control over their films and the profits generated.

In 1921, he, Pickford, Chaplin, and others, helped to organize the Motion Picture Fund to assist those in the industry who could not work, or were unable to meet their bills.

During the first ceremony of its type, on April 30, 1927, Fairbanks and Pickford placed their hand and foot prints in wet cement at the newly opened Grauman's Chinese Theatre in Hollywood. (In the classic comedy Blazing Saddles, Harvey Korman's villain character sees Fairbanks' prints at Grauman's and exclaims, "How did he do such fantastic stunts...with such little feet?")

Fairbanks was elected first President of the Motion Picture Academy of Arts and Sciences that same year, and he presented the first Academy Awards at the Roosevelt Hotel. Today, Fairbanks also has a star on the Hollywood Walk of Fame at 7020 Hollywood Boulevard.