Laurel and Hardy were a comedy duo act during the early Classical Hollywood era of American cinema. The team was composed of Englishman Stan Laurel (1890–1965) and American Oliver Hardy (1892–1957). They became well known during the late 1920s to the mid-1940s for their slapstick comedy, with Laurel playing the clumsy and childlike friend of the pompous bully Hardy. The duo's signature tune is known variously as "The Cuckoo Song", "Ku-Ku", or "The Dance of the Cuckoos". It was played over the opening credits of their films and has become as emblematic of the duo as their bowler hats.

They appeared as a team in 107 films, starring in 32 short silent films, 40 short sound films, and 23 full-length feature films. They also made 12 guest or cameo appearances, including the Galaxy of Stars promotional film of 1936. 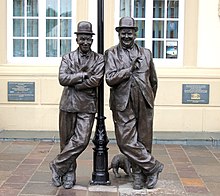 There are three Laurel and Hardy museums. One is in Laurel's birthplace, Ulverston, United Kingdom and another one is in Hardy's birthplace, Harlem, Georgia, United States. The third one is located in Solingen, Germany.